Simple guidance for you in blockchain technology 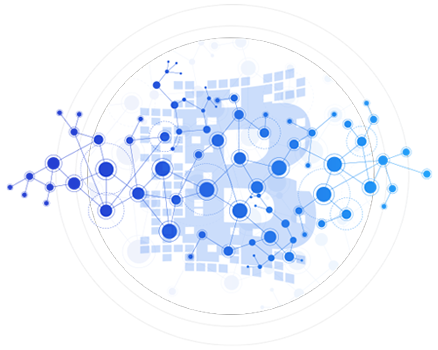 The 21st century is all about technology. Modern technology has completely changed ourselves in endless ways – revolutionizing how we play, work, and live. With the extending necessity for modernization in our everyday lives, people are open to accepting new technologies. We all rely on technology, and we utilize different technologies to accomplish specific tasks in our lives. From utilizing a remote for controlling gadgets to utilizing voice notes for giving instructions; modern technology plays an important role in our regular lives. Because the world continues developing, technology will change, what is working today probably won't work tomorrow. So it is better to remain fully informed regarding new rising technologies. Technologies like augmented reality and IoT that have picked up the pace in the previous decade and now there's another addition to the pack i.e. Blockchain Technology.

Blockchain – The revolutionary technology influencing different industries magnificently was introduced in the business sectors with its first current application Bitcoin. Bitcoin is just a kind of digital currency (cryptocurrency) which can be used for trading in the place of fiat money. And the basic technology behind the success of cryptocurrencies is named as Blockchain.

A blockchain, initially block chain, is a growing list of records, referred to as blocks, which are connected using cryptography. Blockchain is resistant to modification of the information. The blockchain is an undoubtedly brilliant invention and it was invented by Satoshi Nakamoto in 2008. By enabling computerized data to be distributed however not duplicated, blockchain technology created the establishment of another kind of Internet.

So what is blockchain?

Blockchain can offer a leap to bridge the gaps existent in the current system, like a structure of Government Administration, Banking & Financial, Engineering, Businesses etc. Current technology has many ambiguities and flaws such as loss and theft of personal information. Blockchain has been identified as a potential solution for such challenges. It has all the features which can prevent the problems mentioned above. Moreover, the traceability feature makes it easy for anyone in the system to track the source of information in some time, which is not possible with the current technology, thus, making blockchain a huge success and basic support for the future course of action.

In the age of cryptocurrencies, we hear about the underlying technology known as blockchain. At the center of blockchain technology is a publicly shared “Immutable Digital Ledger” – implies that it is basically a sealed record-keeping innovation.

Ledgers have been a part of how people exchange since about the start of our species and keeps on being the means by which we record transactions. Until blockchain, records were typically controlled by one entity and could be controlled without others knowing. US old-timers conjointly remember the long, blunder ridden manual record-keeping on inexperienced writing paper for sales transactions or inventory following — that is the reason VisiCalc, the essential electronic program, was such a distinct advantage. With just a single copy of any record, it's anything but difficult to control the information when "nobody is watching." Today's private records — regardless of whether it's in managing an account, property, expenses or medicinal services — expect us to "trust" the association that controls it. This middleman model is additionally in what capacity numerous worldwide associations have turned out to be so amazing; we're required to utilize them so as to execute a transaction. This system of secretly controlled records that don't converse with one another is additionally why such huge numbers of transactions take such a long time to execute.

This stranglehold on such a large number of informational collections is the thing that provoked the maker of blockchain to build up this openly unmistakable, distributed ledger platform. Envision a record that is partaken progressively with a huge number of others that demonstrates each exchange in a consistently developing list of transactions. To additionally secure these public records, encryption keys are made for every entry that binds to the following section, which shapes a "chain" of interconnected entries to the record. Any endeavor to change an entry would result in the “breaking of the chain,” which would unmistakably be seen by a large number of other associated records that had the credible section, and the culpable PC gets "kicked" from the record. This decentralized record likewise wipes out the middleman; in this way, transactions wind up balanced, quickly. It's the reason such a large number of vast "gatekeeper" organizations are minimizing the estimation of this innovation.

What blockchain is not?

The internet is going obsessed with this new popular expression called "Blockchain." As an innovation, blockchain is so new and well known that individuals don't have an appropriate thought regarding it and its applications. So let me help you right the 10 misinterpretations concerning blockchain. 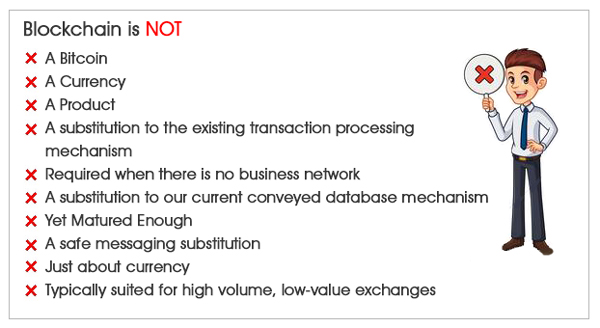 1. Blockchain Is Not A Bitcoin :

2. Blockchain Is Not A Currency:

Again as we talked about before, blockchain can't be a digital currency like bitcoin as it is, for the most part, a database which holds transaction records. It is like saying that MongoDB the database behind PayPal isn't money.

3. Blockchain Is Not A Product:

Many Decentralized Apps are being based on blockchain where it is acting like texture yet the blockchain itself isn't that application or an item. These items use it as a utility and are primarily based on it.

4. Blockchain isn't a substitution to the existing transaction processing mechanism

To have the capacity to supplant our at present existing transaction mechanism blockchain needs to satisfy some essential criteria like :

In case all the above esteem and criteria are met then nobody however it might be a possibility to displace our ordinary trade structure, else it will be too soon to state that it can replace it completely.

5. Blockchain isn't required when there is no business network

6. Blockchain isn't a substitution to our current conveyed database mechanism

7. Blockchain Is Not Yet Matured Enough

Truly it has scaled too quick too rapidly when contrasted with TCP/IP Internet Wave yet despite everything it can't seem to experience that growth period where we can say it has completely developed and is broadly acknowledged simply like web wave. For blockchain to reform this digital arena needs to conquer numerous challenges. Technology, administration, society, organizations all need to meet up to make it a marvel. The issue is, with all the exposure, it's easy to think blockchain for business is more developed than it is.  A sentiment of reality must be kept up, particularly when searching out the use case for a blockchain first project.

8. Blockchain is definitely not a safe messaging substitution

while blockchain is an incredible decision for a directed digital currency, it might be utilized to keep a trusted review train of responsibility for huge scope of advantage types – both substantial (house, vehicle, diamond, old-fashioned violin) and impalpable (advanced music, digitized video, monetary instrument, advanced products) resources. This makes for an exceedingly unique choice of blockchain use cases.

As blockchain for business develops, texture engineers will swing to non-utilitarian prerequisites including exchange throughput. In the close term, the technology stays more qualified to low volume high-value exchanges. Thanks to the extra qualities of service that a distributed process system provides.

So, how does the blockchain work? Let's review a couple of key highlights before we dive into the details:

1. Blockchain tracks all data exchanges — this record is known to as a “ledger” in the cryptocurrency world, and each data exchange is a “transaction“. Every checked and verified transaction is added to the ledger as a “block”.

2. It uses a distributed system to check and verify every transaction — a peer-to-peer network of nodes.

3. When marked and confirmed, the new transaction is added to the blockchain and can't be changed.

A blockchain is essentially a chain of blocks that contain data. Every block has its own hash and also the hash of the previous block.

A unit of data stored inside a block might be addressed by any value based on the type of the blockchain. A block can store an amount of money, a share in a company, a vote during an election, or any other value.

A block stores encoded details about the parties whose interaction took place as a data stored in the block. A cryptocurrency block furthermore contains the sender’s and receiver’s encoded identifiers. For example, a block for an e-commerce transaction will carry the identifiers of the seller and buyer.

Each block also has a hash. This hash is a value generated from a line of text utilizing a mathematical function. A hash can be collated to a fingerprint, as each hash is unique. Its role is to identify a block and the block’s content.

Once a block is generated, a hash is calculated. Changing something inside the block makes the hash change. So a hash also shows changes made to the block.

If anyone changes the data in a single block, the hash of that specific block changes, yet it also makes the entire chain invalid.

A hash is an extraordinary tool for detecting attempts to change data in blocks. However, a hash algorithm alone isn't sufficient to establish the security of a blockchain. To reduce attempts to corrupt the blockchain and to guarantee security, blockchain technology also uses a process called proof-of-work.

Proof-of-work is a process of generating data that are difficult to get, however, easy to verify. With regards to a blockchain, proof-of-work is about solving mathematical problems. If a problem is successfully resolved, then a new block can be added to the blockchain. On average, performing proof-of-work calculations and adding another block to the chain takes around 10 minutes.

What’s behind the proof-of-work process?

Computers that establish the blockchain network race to solve a mathematical problem to get a reward and be the first to add the next block to the chain.

Mathematical problems in blockchain must be difficult to solve but easy to check in order to prevent cheating.

Together, hashing and the proof-of-work technique ensure the security to the entire blockchain network.

Since a blockchain contains a vast number of nodes, each of them is simultaneously carrying out proof-of-work. Thus, a situation when various nodes cope to complete proof-of-work with a valid result is pretty common. When this happens it’s known as a hard fork, which describes exactly what happens to the blockchain – it forks.

When new blocks are generated and added to one of these forked chains, it turns into the longest and again the only valid chain. Blockchain nodes reject the blocks from other forked chains, and all the transactions held in those blocks are sent for verification again.

So far, the longest fork made it is no more than five blocks in a row.

A public key can be contrasted with a postbox. Anybody can put a letter inside of it, however, they can’t get that letter back. Only a postal authority who has a private key can open the postbox and get the letter.

This is like how keys inside a blockchain work. Anybody can send a transaction using a public key to the address of a receiver. This is like putting a letter in a postbox. However, only the owner of that address who also has the private key can access the value of that transaction.

Anybody is permitted to join a blockchain distributed network. When somebody joins a network, this individual gets a full copy of the blockchain. Distributed storage of data along with the effective hashing and proof-of-work techniques helps to prevent almost any fraud.

Blockchain is a secured network. For example, in order to add a block containing an invalid hash or invalid data, duplicate an existing block, or perform a fraudulent transaction, an attacker would need to hack the computer of each blockchain member and slip in the invalid block.